Thank you Nevada Business Magazine! We are honored to have won an award in the Battle Born category and to have been named among so many other outstanding Nevada Businesses. 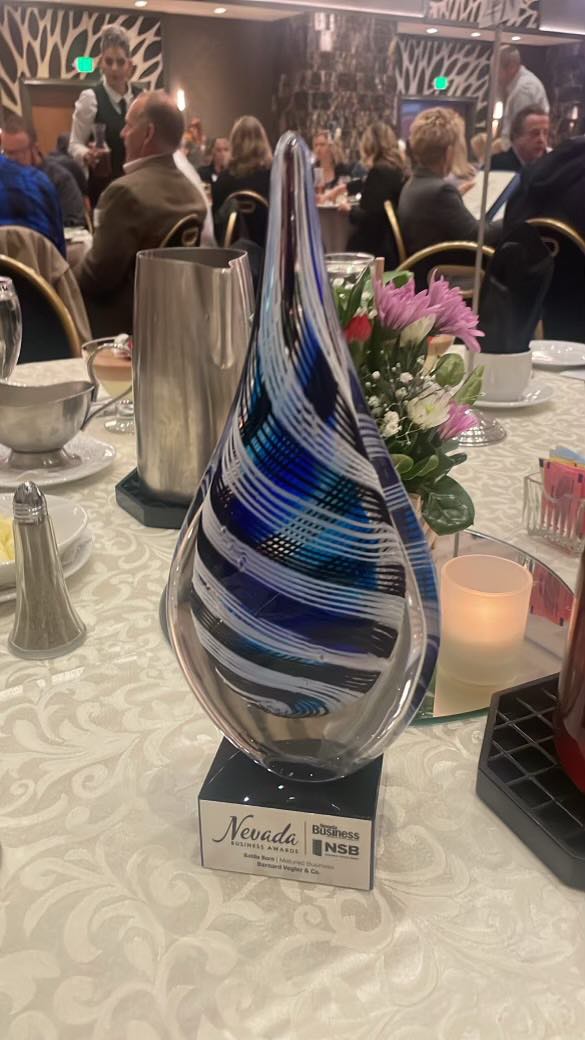 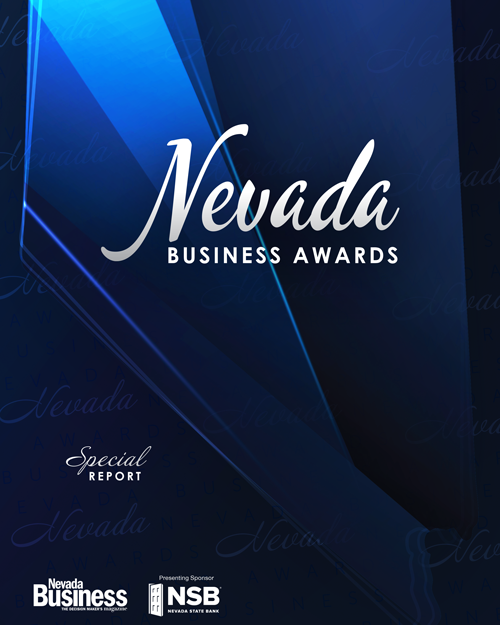 Thank you Nevada Business Magazine! We are honored to have been selected among so many talented companies. Congratulations to all of this year’s finalists. 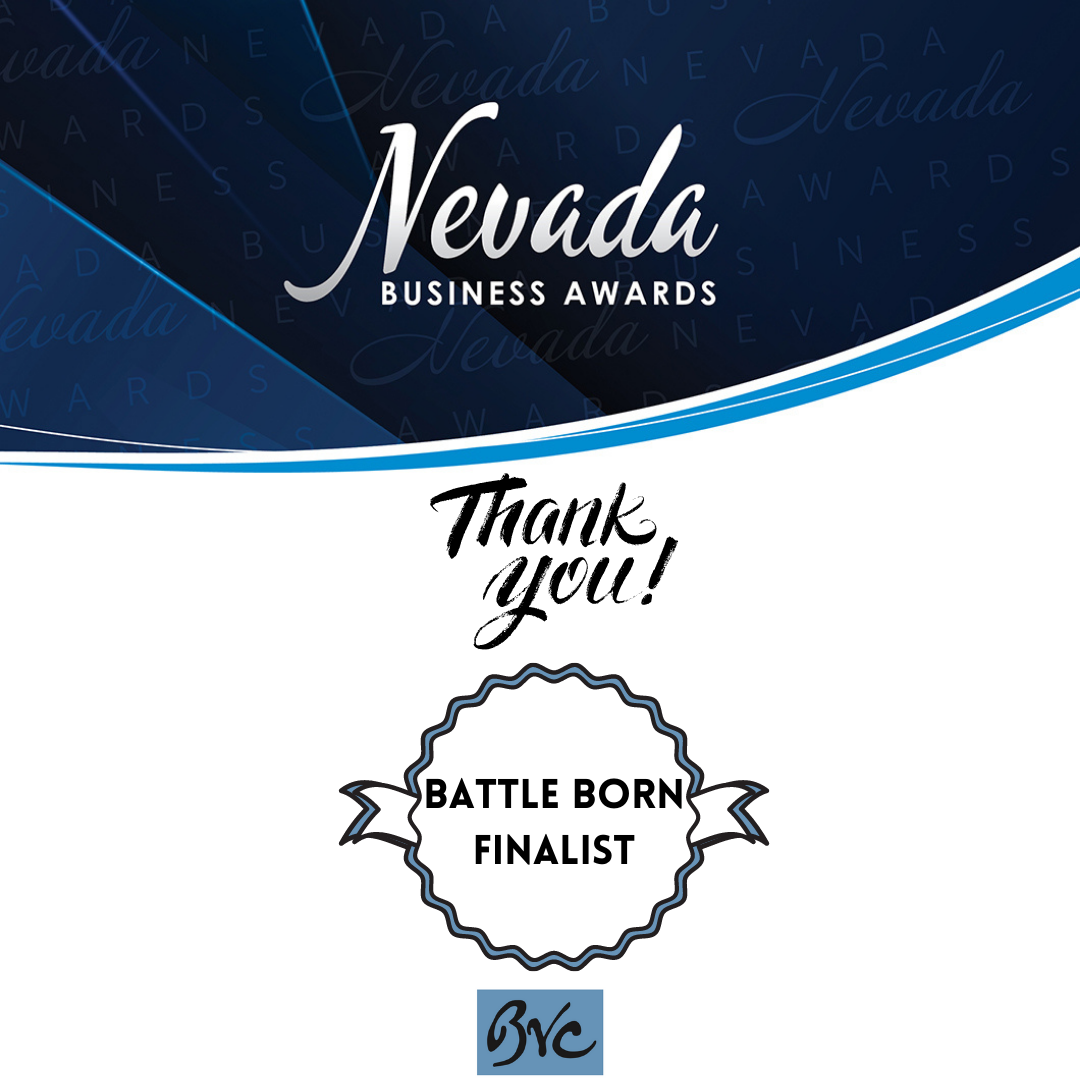 The results are in and we are honored to have been named among so many talented companies and individuals! Thank you Northern Nevada Business Weekly and everyone who voted for us! Congratulations to all of this year’s winners. See the full list here! 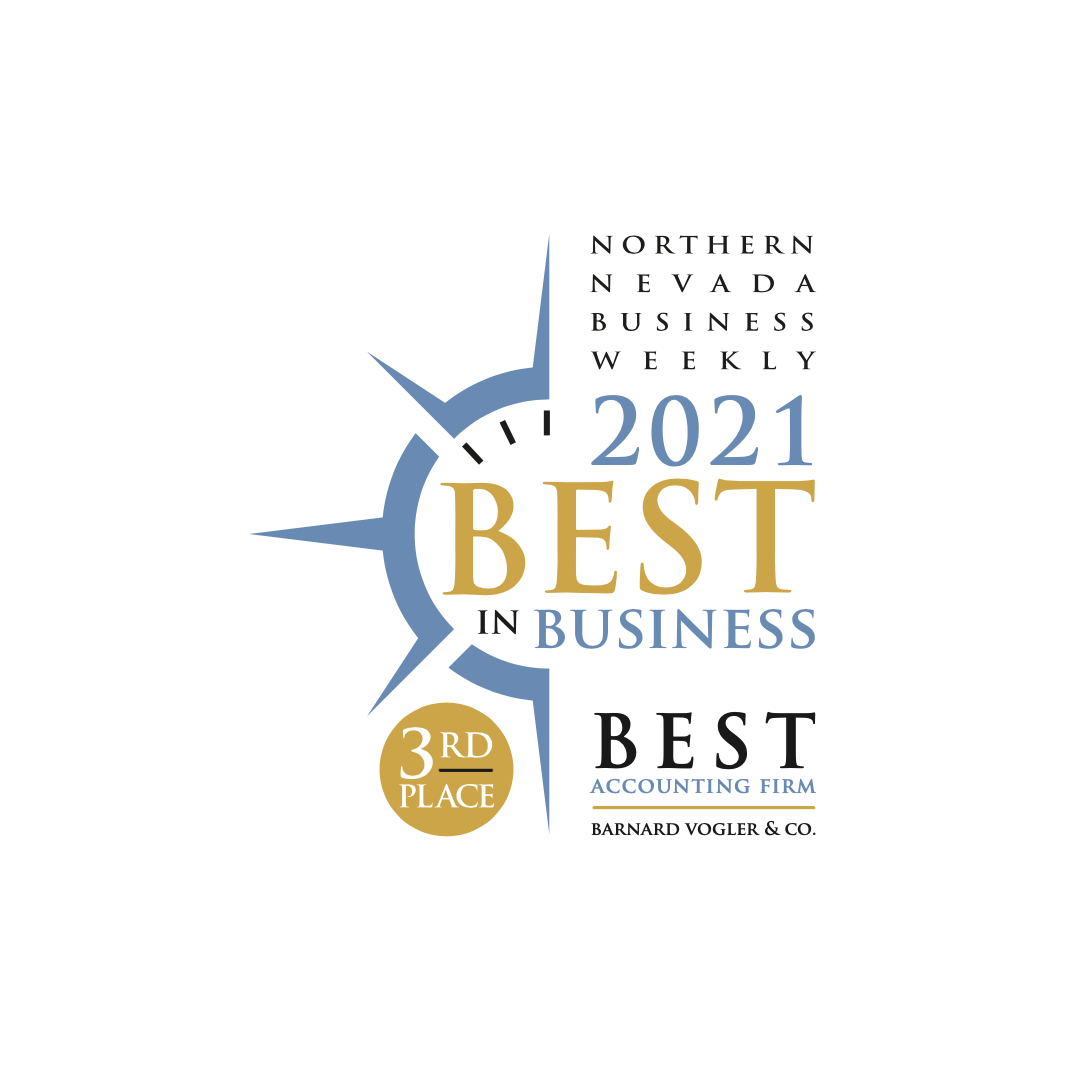 Congratulations to managing partner, Leslie C. Daane, CPA, CGMA, AEP, on her appointment to the Northern Nevada Advisory Board!

Nevada State Bank this month announced members of its Northern Nevada Advisory Board.

“These business and community leaders will provide valued insight and experience to ensure the bank continues to understand and serve the financial needs of the local community,” according to a Dec. 6 press release.

“We created this regional advisory board to more deeply focus on the unique environment and development of northern Nevada,” Terry Shirey, president and CEO of Nevada State Bank, said in a statement. We believe this amazing group of individuals will enhance the service level and effectiveness of our colleagues by bringing their experience and insights to the table.”

“We invited these individuals to our advisory board to share their insights and perspective with our executive team to ensure we have a robust and comprehensive understanding of our market,” Nevada State Bank EVP and Northern Nevada Executive Rick Thomas said in a statement. “Nevada is a diverse state and it’s important to our bankers and to our company that we stay as informed and connected to this community as possible.”

Over the past 20-plus years, Learner has worked in financial leadership roles in a variety of industries, including healthcare, manufacturing, software development, nonprofit and wholesale distribution. He provides CFO, accounting and back-office support to clients, as well as support for tax services and audit engagements. 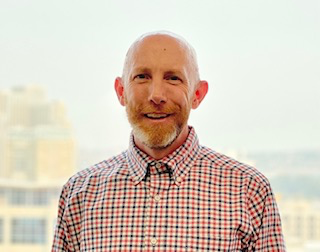 The American Rescue Plan Act, enacted in March 2021, made changes to the Child Tax Credit which will benefit many taxpayers.

The IRS will pay half of the Child Tax Credit in the form of monthly payments starting July 15, 2021, unless the tax filer contacts the IRS to decline this option.  Taxpayers who receive the advance payments will then claim the other half when they file for their 2021 income tax return.

These tax changes will only apply to the 2021 tax year. Though temporary, these changes may present important cashflow and financial opportunities. It is also significant to note that the monthly advance of the child tax credit is a substantial change. The credit is normally part of your income tax return and reduces your tax liability. Choosing to have the tax credit advanced will affect your refund and the amount due when you file your return.

How much to expect and the qualifications:

The child tax credit advanced payments are based on a number of factors, including the age of your children and household income.

In order to qualify for the child tax credit advanced monthly payments, you (and your spouse if you file a joint tax return) must have:

You may take full advantage of the tax credit if your income (principally, your modified adjusted gross income) is less than $75,000 if filling alone or $150,000 if filing jointly and $112,500 for head of household filers. After which the credit begins to phase out above those thresholds.

In general, taxpayers will not need to do anything to receive these advanced payments as the IRS will use the information it has on file to begin issuing child tax credit payments.

There is also a non-filer portal to use for certain situations if you qualify.

Should you wish to discuss these changes and how they affect you, please do not hesitate to contact us. 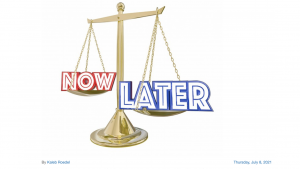 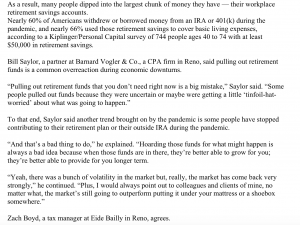 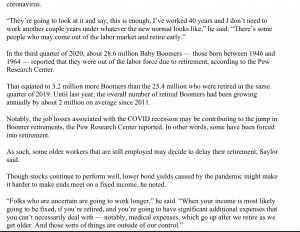 Congratulations to Nhit Hernandez and Jared Streshley on their promotions to senior accountants. Read more below!

Hernandez joined Barnard Vogler & Co. in 2019 as a staff accountant, per a press release from the firm. 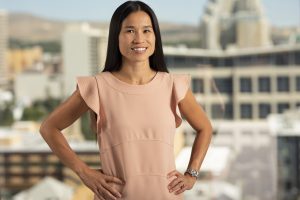 She earned a Bachelor of Science in business administration with majors in accounting and international business from the University of Nevada, Reno. She has completed her CPA exams and is working towards becoming a licensed CPA, according to a March 25 press release.

Streshley joined Barnard Vogler & Co. in 2019 as a staff accountant and has experience in auditing for nonprofits and government entities. He earned a Bachelor of Science in business administration with an emphasis in accounting, also from UNR.

Bill Saylor was featured in the Northern Nevada Business Weekly. He discussed rethinking retirement and how to handle investments during uncertain times. Read more below!

For many Americans, a top resolution every new year is a simple goal: save more money.

Achieving that in 2021, however, may not be so simple. For many, it will be much more difficult and may have to be done a bit differently, especially when it comes to saving for retirement.

In fact, nearly four out of 10 people said they will be in “survival mode” in 2021, focusing on dealing with day-to-day money matters, according to a survey by Fidelity, the nation’s largest 401(k) provider.

After all, many Americans faced a financial setback in 2020, whether it was a job loss, unexpected expenses, giving financial assistance to family and friends or dealing with a health emergency, the survey found.

As a result, many people dipped into the largest chunk of money they have — their workplace retirement savings accounts.

Nearly 60% of Americans withdrew or borrowed money from an IRA or 401(k) during the pandemic, and nearly 66% used those retirement savings to cover basic living expenses, according to a Kiplinger/Personal Capital survey of 744 people ages 40 to 74 with at least $50,000 in retirement savings.

Bill Saylor, a partner with Barnard Vogler & Co., a CPA firm in Reno, said pulling out retirement funds is a common overreaction during economic downturns.

“Pulling out retirement funds that you don’t need right now is a big mistake,” Saylor said in an interview earlier this year. “Some people pulled out funds because they were uncertain or maybe were getting a little ‘tinfoil-hat-worried’ about what was going to happen.”

To that end, Saylor said another trend brought on by the pandemic is some people have stopped contributing to their retirement plan or their outside IRA during the pandemic.

“Yeah, there was a bunch of volatility in the market but, really, the market has come back very strongly,” he continued. “Plus, I would always point out to colleagues and clients of mine, no matter what, the market’s still going to outperform putting it under your mattress or a shoebox somewhere.”

“If you’re financing your retirement, make sure that you’re putting your money away because the market returns are pretty good,” Boyd said. “There’s really nowhere else to put your money — with interest rates being low, bonds don’t make sense. You might as well throw it in stocks. That’s the thing, there’s always money pumped into the economy, so there’s always a lot of cash floating out there right now.”

Some people may be tempted to “get rich quick” and jump into day trading due to the volatility in the stock market. Boyd suggests resisting the urge to sell.

Boyd said that some older workers and near-retirees that stayed with their stock portfolio possibly had their retirement plans accelerated by the pandemic.

Others, Saylor said, may retire early because of the unique health barriers posed by the coronavirus.

“They’re going to look at it and say, this is enough, I’ve worked 40 years and I don’t need to work another couple years under whatever the new normal looks like,” he said. “There’s some people who may come out of the labor market and retire early.”

In the third quarter of 2020, about 28.6 million Baby Boomers — those born between 1946 and 1964 — reported that they were out of the labor force due to retirement, according to the Pew Research Center.

That equated to 3.2 million more Boomers than the 25.4 million who were retired in the same quarter of 2019. Until last year, the overall number of retired Boomers had been growing annually by about 2 million on average since 2011.

Notably, the job losses associated with the COVID recession may be contributing to the jump in Boomer retirements, the Pew Research Center reported. In other words, some have been forced into retirement.

As such, some older workers that are still employed may decide to delay their retirement, Saylor said.

Though stocks continue to perform well, lower bond yields caused by the pandemic might make it harder to make ends meet on a fixed income, he noted.

“Folks who are uncertain are going to work longer,” he said. “When your income is most likely going to be fixed, if you’re retired, and you’re going to have significant additional expenses that you can’t necessarily deal with — notably, medical expenses, which go up after we retire as we get older. And those sorts of things are outside of our control.”